So Much Records
Maison de disques

Born in California and raised in Pennsylvania, Egilda began writing songs and poems when she was five, spending hours recording her poems and songs on tape in her bedroom. Although she was always working on some sort of project, her professional writing career started many years later. While living in France in 2010, she began working with the president of Ghost L.A. Records, and wrote songs for other artists on that label. Soon this led to a record deal.

Egilda’s unique sound comes from her love of the inherent rhythm of words, as well as from growing up on a varied musical diet- from Lead Belly to Herman’s Hermits, Meatloaf to Danzig, Nick Cave to Tori Amos, and everything in between. Although she loves singing, and has a distinctive and expressive voice, Egilda first and foremost sees herself as a writer. She feels that the lyrics should bring as much pleasure to the listener as the music itself. When not working with music Egilda studies weapons of mass destruction and likes to cook for people and ride horses. The Length of Men is her debut album.

Label: Ghost L.A
Distribution: So Much

Egilda - The Length of Me

Album : The Length of Me 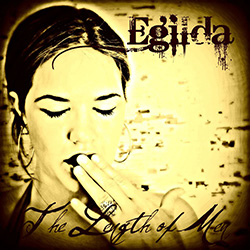